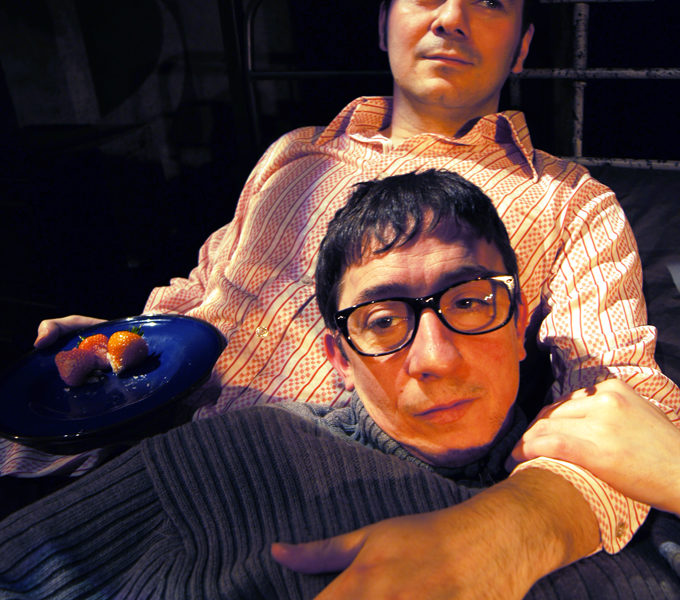 EDWIN MORGAN’S DREAMS – AND OTHER NIGHTMARES
by Liz Lochhead

AUTHOR’S NOTE:
Last year, only a month or so after the death of Edwin Morgan, I read Beyond the Last Dragon the newly-published, and quite wonderful, biography of the poet by his friend and helper-in-old-age James McGonigal. I couldn’t put it down. On Morgan’s last birthday, his 90th, a few months before that, Mariscat Press had published a wee book of poems, Dreams and Other Nightmares which was to prove his last. The opening poems had haunted me, but only, I think, became complete — without in any way robbing them of their mystery — once I read in Beyond The Last Dragon the account of how they came into being. The figures of the Biographer and the old Poet in his care-home room suddenly tortured by a series of nightmares and at the very edge of losing his life-long mode of expression just seemed to exist, bang, as a theatrical scene fully formed. Two actors, no, three actors, almost no set… I could see it. Glasgay! and its Producer, Steven Thomson, determined to celebrate the life and work of Morgan a year after his death had already expressed interest in my writing something – and I’d said no, I didn’t think I could.

Having first approached James McGonigal — who, amazingly, had given me a scary amount of blanket go-ahead-and-make-it-up permission, and, equally generously, had even read and approved the first inchoate splurge I’d written – I then got back to Glasgay!. And Glasgay! and the Tron Theatre pulled out all the stops to make this happen. Although this is based on Beyond the Last Dragon, the characters “James”, “Mark”, “Edwin” and others have been at times freely fictionalised, and many scenes invented, for dramatic purposes.